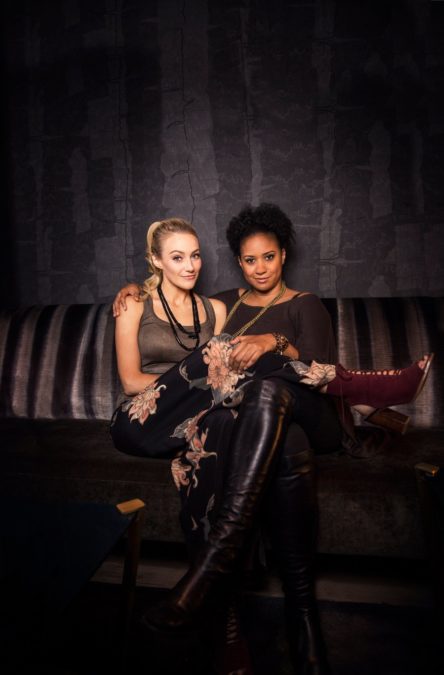 Two of the most beloved supporting characters in modern-day musicals are “the lesbians next door,” kosher caterer Cordelia and internist Dr. Charlotte, in Falsettos. Introduced by composer William Finn in 1990’s Falsettoland (now the second act of the show), these strong and loving women serve as counterpoints to the angst surrounding lead couple Marvin and Whizzer. The brilliantly cast Broadway revival features Betsy Wolfe as Cordelia and Tracie Thoms as Charlotte, and the actresses seemed perfectly in sync during a recent chat about this ahead-of-its-time musical, keeping it together while singing the ballad “Unlikely Lovers” and connecting with fans on social media.

TRACIE: Yeah, they do. Falsettos is a phenomenon that I missed the first time around.

BETSY: I did, as well, but people on the street have literally stopped me and said, “You are going to say one of my favorite lines in musical theater.” People really love that line where she says, “You save lives and I save chicken fat. I can’t fucking deal with that.”

Q: And Tracie gets to sing about “saving lives and loving you.” What’s better than that?

TRACIE: Nothing! I mean, look at this stunner. What I love about [Cordelia and Charlotte] is that they’re so comfortable with who they are, at a time when a lot of queer people were not. They’re kind of trailblazers for their time period. And because they cast me in the role—lesbian and black and a doctor—it shouldn’t all work but it does.

BETSY: Some could say it’s one of the healthier [relationships] in the show. The first act is an examination of this immediate family, and the second act is a chance to see what [gay life in 1990] looked like for a community. We kind of represent the outer world.

Q: How did you two bond? Did you feel right away that you would make a good pair?

BETSY: I have to say, I’ve never had a more natural progression with someone I’m playing a love interest with. Most of the time I’ve met the people on photo shoots and you’re nuzzling and saying, “So, where are you from?” And, like, kissing them and saying, “Oh, one sibling? Great, OK!” Tracie and I met at a function a couple of years ago and then had dinner before we started, so it felt quite natural.

TRACIE: I came in late to the audition because I’m in L.A., so I flew in and had to sing all this stuff. Then Betsy came in, and I’m like, “Oh!”

TRACIE: “Hey girl! Oh, this is easy. We have a shorthand for this. It’s fine.”

Q: Are you having fun getting into character in midi-skirts and ’80s wigs?

TRACIE: I love it. I’m kind of obsessed with it, although it freaks me out a little bit because I look in the mirror with my wig on and I look just like my mother in the ’80s.

BETSY: I actually look very different than the posters, which is kind of exciting, but I still look like my mother! It’s awesome. 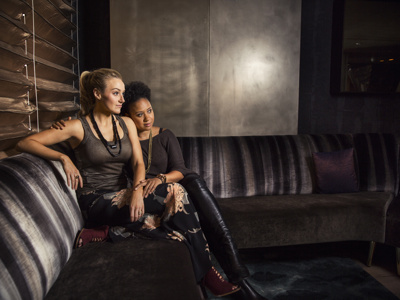 Q: Let’s talk about “Unlikely Lovers,” the emotional high point in Falsettos. How do you and your co-stars [Christian Borle as Marvin and Andrew Rannells as AIDS patient Whizzer] make it through that song?

TRACIE: It’s difficult, but we just have to because we’re there to serve Whizzer.

BETSY: Something age and maturity and time have taught me, from a couple of times in a hospital room with someone dying, [is that] you’re trying to come up with any way to make those moments cheerful. It’s four people just trying to navigate something they’re never navigated before.

TRACIE: You can grieve later. We’re all helping each other be strong. If one person in the quartet starts to lose it, the other three of us [are like], “Nope, we’re not doing that right now.”

Q: On a lighter note, who is the biggest joker in the cast?

TRACIE: Andrew and Christian. The two of them are just incorrigible.

BETSY: But man, I tell you: Give Steph enough coffee in the morning…

TRACIE: Oh my god, Stephanie Block is a riot. I had no idea! She’s so funny in a surprising way. So dry, like a bone. But Brandon [Uranowitz, as psychiatrist Mendel] is ridiculous, too.

Q: Betsy, Falsettos is the latest in your resume of “wordy” musicals [The Last Five Years, The Mystery of Edwin Drood, Merrily We Roll Along].

BETSY: What do you mean? [Laughs..] Maybe it’s because I grew up loving Sondheim so much. Into the Woods was one of the shows I watched on VHS on repeat as a kid. It’s when I knew I wanted to do musical theater. So I love wordy shows.

TRACIE: I’ve done one Broadway musical and it was Rent, after the movie, and it was only five weeks at the end. I’m actually terrified of doing a Broadway musical, but I love it because it’s the biggest expression of what we do. You get to use all of yourself in a way that you don’t get to do in any other medium. It’s really thrilling.

Q: Both of you are active on social media, including Tracie’s 80,000-plus Twitter followers. What do you enjoy about it?

BETSY: God, Myspace? You really took it back.

BETSY: No, I do not remember Friendster. See, I’m not on Snapchat. All these young’uns are on Snapchat. I like to think I have a healthy balance on social media, but I realize people want access to what you’re doing. It’s a little daunting, but at the same time it’s cool to know that people reach out and they like your work. That’s always appreciated!